As gas and dust fall toward a black hole, they form a disk around it. As material piles up in the disk, it heats up to temperatures in excess of millions of degrees. A fraction of this infalling matter is ejected in the form of winds.

Scientists have tracked the generation of this wind and how it is driven by the disc of diffused swirling materials around the black hole called an accretion disc.  Matter flowing out due to the wind should contaminate the environment play a major role in the evolution of the region harbouring these black holes. Therefore how such a process can be triggered need to be ascertained. Though these processes are still at the level of theoretical prediction, consensus has not been reached. 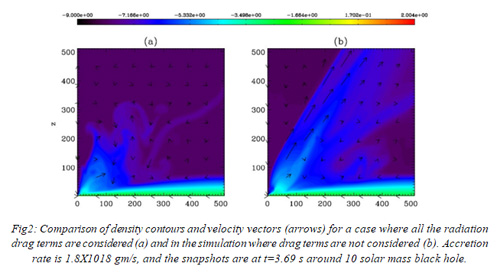 Scientists from Aryabhatta Research Institute of observational sciences (ARIES), an autonomous institute under the Department of Science and Technology (DST), Govt. of India, in collaboration with scientists from other institutions, undertook a time-dependent study of the generation of wind and its subsequent driving by the radiation from the diffuse material in spiral motion around a massive central body called the black hole accretion disc using numerical simulation techniques developed indigenously.

The scientists tried to figure out whether driving of the wind by radiation flux can dominate the radiation drag effect--- a motion resisting effect which is similar to the resistance offered by air to a moving stone or to a descending parachute. This effect is produced when radiation penetrates a moving medium and is proportional to radiation energy density, various components of radiation pressure, and the velocity components of the wind.

The authors showed that luminous discs can produce winds up to speeds which is about ten percent of the speed of light, and also that these winds originated from regions close to the central black hole. Radiation drag plays a key role in reducing the speed of wind. For less bright discs, radiation drag quenches the wind completely.

The research was led by Sananda Raychaudhuri of Bose Institute, Kolkata, in collaboration with Mukesh K. Vyas of Bar Ilan University, Israel, and Indranil Chattopadhyay of ARIES and has recently been accepted for publication in the scientific journal Monthly Notices of Royal Astronomical Society (MNRAS). The authors used a numerical simulation code developed earlier by Dr. Chattopadhyay to study the galaxy environment by modifying it suitably to perform the simulations of wind flow from black hole accretion disc.